The village was built in the era of late Baroque (1700-1780). In the Baroque period, the construction of ideal cities was desired and rulers wanted and promoted. The city was seen as a rationally calculated functional, unified synthesis of the arts. considered. A characteristic feature is the regularity of the predominantly symmetrical-polygonal plan, often in continuation of Vitruvius' ideas. [Koch]

As a crown land directly subordinated to the emperor (1718 - 1778), the absolutism of the Habsburg monarchy became the the decisive motor of baroque landscape design in the new province of Banat. For the Habsburg monarchy, the region partly devastated by war and sparsely populated in some areas offered the Habsburg monarchy a welcome field for experimentation. Here, ideas could be realized without significant resistance and and, initially, without high costs, ideas could be realized that were not in line with absolutism, state centralism and the Viennese variety of mercantilism - cameralism. Whereas elsewhere it was primarily cities that were redesigned and remodeled, creating Baroque works of art, in the Banat the Habsburg rulers were able to create an entire landscape as a monument to themselves. The Theresian village foundations (1763-1772) were surveyed by engineers according to preconceived village plans and laid out without regard for the the natural shape of the terrain. Thus, the individual rows of streets did not subordinate themselves to the landscape, but followed the planned abstract geometric figure. The village plans were drawn up by provincial engineers, artillery officers and fortification architects on behalf of the responsible central office in Vienna or the provincial administration in Timisoara [Volkmann]. 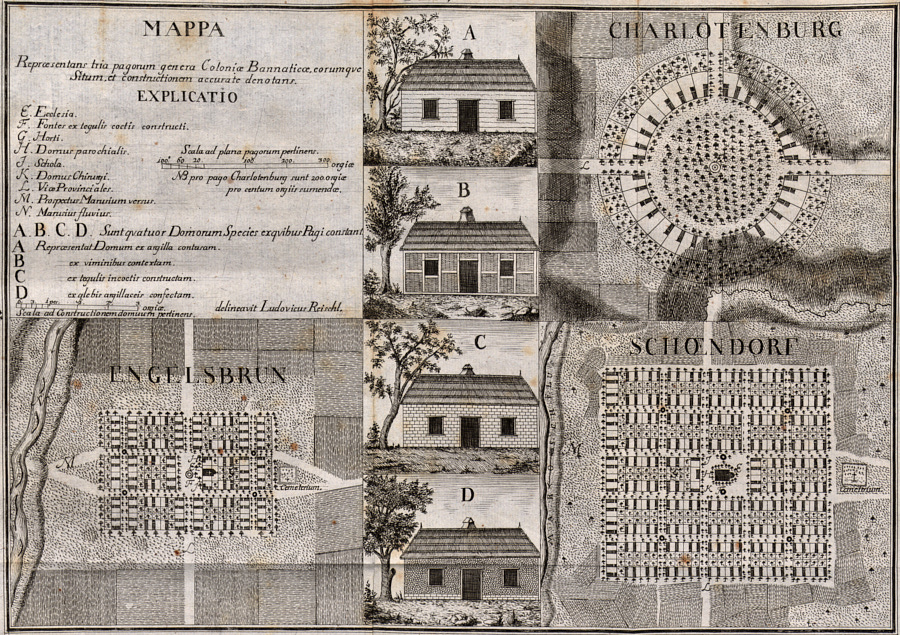 There were 32 house sites planned with 4 access roads exactly aligned with the cardinal directions. The north and west streets have been preserved. The south street can be recognized by a larger house square. Even the 8 house squares between the streets are recognizable. The inner diameter is about 210 meters. That is 111 Viennese fathoms.

Griselini wrote in the year 1780: „I liked the layout of Charlottenburg, which forms a circle round a mulbery plantation, very much“.

On 5th of March, 1779 Johann Caspar Steube writes about the village in his third letter from Temeswar [Steube]:
„I would like to give you a chorograpie about this village, which may be unique in its kind. In the middle of the village there is a well with good water and with a roof. This well is surounded by a perfect circle of mulberies. Around this plantation there is a round treeless square and around this square there is again a round range of mulberies. Behind these trees the houses are also built in a circle. Each house has got a wide court with the necessary stables and barns, behind this court there is a garden and behind the garden there is a vineyard. None of the houses is an inch higher than the others and all of them have the same distance one from the other“.

One still can find today 34 old mulberry trees in the village. Some of them could have been planted during the settlement.
It has been told that during or after World War One a biplane landed on a field next to the village. The German pilot's attention was attracted by the round form of the village and he wanted to see who lives in that beautiful place.