Charlottenburg is located in the Bergsau, part of the Lippa Hills (dealurile Lipovei), at an altitude of 165 m, between Timișoara/Temeswar (44 km) and Lipova/Lippa (32 km). The Bergsau brook is a tributary of the Old Bega and rises in the forests in the vicinity of Comeat/Lichtenwald and Sintar/Buchberg. Geologically, the hills consist of marl, clay, rubble and sand [Rusu].
The neighbouring municipalities are Remetea Mică, Buzad, Altringen, Alioș and Mașloc. Administratively, it belongs to the municipality of Bogda in the district of Timiș.

After the completion of the Timișoara-Radna railway line in 1897, the village had been easily accessible by rail via the Şarlota railway station.


Horse-drawn carts were often taken to the neighbouring villages, forests or to the pilgrimage to Radna. With the introduction of bus transport in the 1970s, more distant places became more accessible. The railway line was closed in 2020.

A two km walk connects the village with the modest station. The country road from Mașloc to Charlottenburg (DJ691A) is reached in about 500 m and turns left. To the right of the road there are hay meadows that extend to the village gardens, known as Farm Meadows and Teacher Meadows in this region. The Bergsau, lined with bushes and willows, flows some hundred metres away.

After 250 m, there is the first turn-off on the left into the Little Meadows. Next to the hay meadows there was a meadow orchard with plum and damson trees. Schnapps was distilled from the fruit, jam and cakes were baked. In the valley there was a spring with excellent drinking water. Further back on the right is the cutting called by the villagers Römerschanz i.e. Roman Redoubt. These are the remains of a defensive rampart, already mentioned by Griselini [Griselini, part 1, page 295]. Current research attributes the construction to the Romans [Gropșian, Forai], identifying it as the relic of a Roman limes. The valley is bordered by the Alioș Forest, called Acacia Forest by the locals. These are robinia trees (Robinia pseudoacacia) which are called acacias in the Banat. The Roman Redoubt stretches for almost 7 km in the Alioș Forest [Gropșian, Forai].

Back on the country road, the church tower of the village can be seen in the distance on the right, above the trees. On the other side of the road, the terrain rises slightly. These are the fields where the farmers cultivated wheat, oats, barley, corn, sugar beets, sunflowers or tobacco. Next to the road, the fields are called Quelle/Source I and Kurzer Acker / Short Field, adjacent to the north, Quelle/Source II and Langer Acker / Long Field. The road makes a right-angled bend towards the village. Straight ahead was the now demolished mill. The path leads into the Mokosch valley. On the left is the Mühlenacker / Mill field, on the right the Hutwart a supervised village cattle pasture. The trail extends to the Alioș Forest, passing by a alpine dairy hut through an area where there were vineyards destroyed by phylloxera.

The country road is now lined with old mulberry trees. These trees, as well as those in the village, were already planted at the time of settlement. Until the 1960s their leaves were used for breeding silk spiders or mulberry spiders (Bombyx mori). On the left you can see the building of the former distillery, then you reach the first "home gardens". On the right side of the path there are some old oaks which, like many other oak trees around the village, provide a habitat for the stag beetle (Lucanus cervus).

The road forks in the village. To the north, in the direction of Altringen, one continues to follow the Bergsau valley. Past the village circle, there lies the cemetery on a hill, directly opposite to the church. To the left of the burial ground, across the Hutwart and into the Mokosch valley you arrive at the clay pit, which was providing raw material for many of the houses in the village.
A right turn leads to the so-called "Vorstadt/Suburb". Following on the left is the Hodaja, a former farmstead which was used by the LPG (agricultural production cooperative) after 1946.

On the other side, in southern direction, is Altenberg / Olds hill and in the valley in front of it, flows the Bergsau. In a break edge of the Altenberg is the Räuberhöhle / robbers' den. A currently only about 10 m long tunnel was hewn into the sandstone. The old people told that inside there was an iron door, and the notorious band of robbers of Rózsa Sándor (1813-1878) had a hideout here. In the hay meadows, in a marshy place called Rohrlack, there are growing reeds, once having been used to cover the to cover the settlers houses.
After the Hodaja, are fields, Kirchenfeld / Church field and Überland/Overland up to the Altringer district.

From the village to the southeast, in the direction of Buzad, one descends into the valley of the Bergsau brook. Leaving the house gardens behind, the Bergsau meadows appear on the left side, a bridge over the Bergsau follows. To the right is the Lunkawald / Lunka wood and a little further to the left the Lindenberg / Lime hill which connects to the Altenberg. 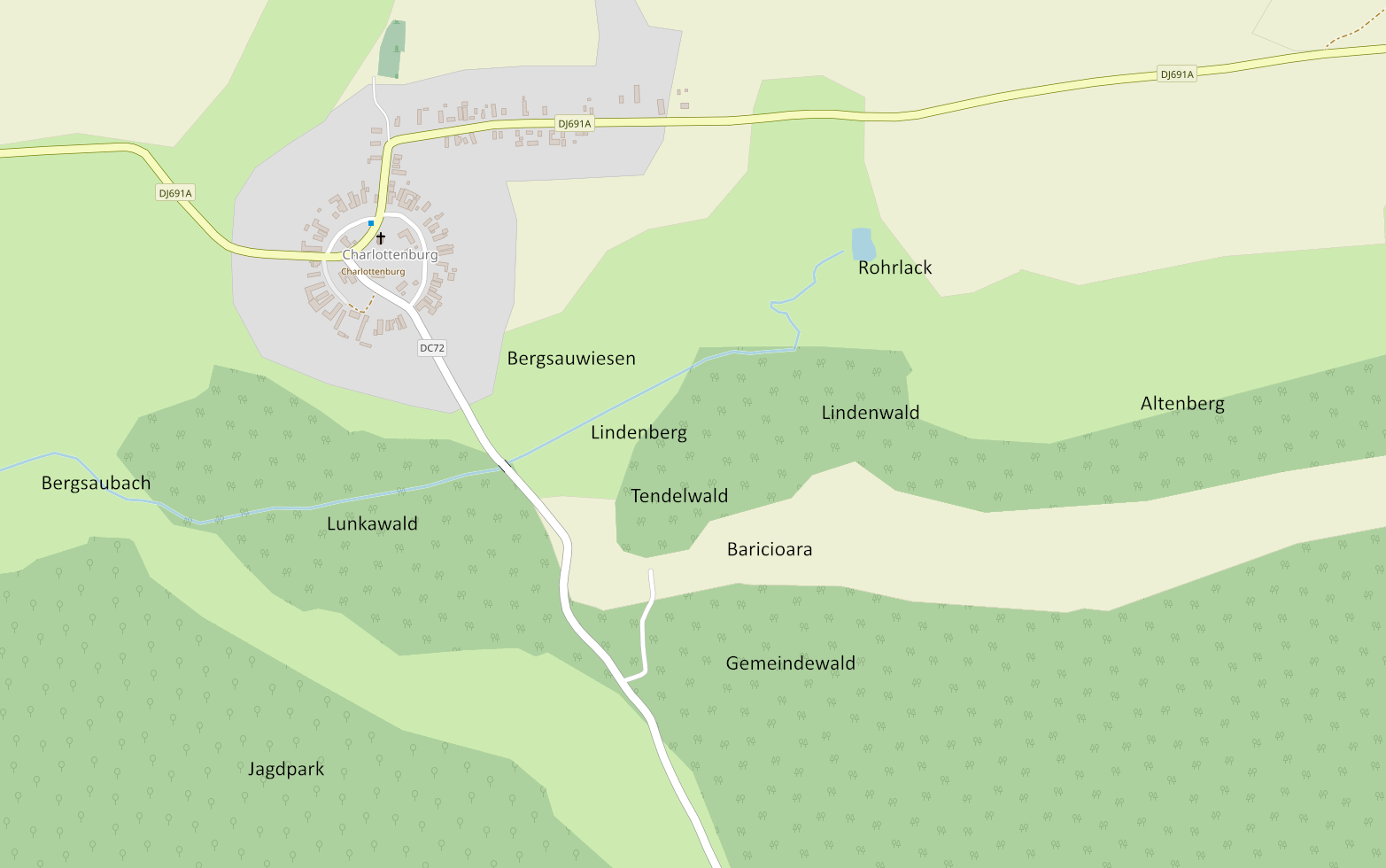 Map generated with OpenStreetMap-Data | Open Database License (ODbL)
This is pasture land. On the Lindenberg is the Lindenwald / Lime forrest and on the border with the Altenberg where the new vineyards and fruit trees grow: apple- cherry, plum, walnut trees. After the pasture there is a small forest, the Tendelwald / Tendel forest. It consists mainly of cornelian cherries (Cornus mas). A forest road separates the Lunkawald from the fenced hunting park. After the Tendelwald, a small meadow called Baricioara opens on the left, followed by the former communal forest.

The hunting park was and is an European hunting ground. For its history see: European Hunting Domain.