Today the village looks more like an apple: round with a crestfallen handle, which stands for the „suburb“. The church, the school building and further four houses can be found in the middle.
At present the village has got rounded 200 inhabitants. It looks very tidy and many of the houses were converted into holiday cottages. The church has been renovated with the donations of the former inhabitants. With the kindly help of the Rumaenienhilfe Marpingen - Help for Romania Marpingen the school building has been redevelopped.
The hunting park was rebuilt and the wire fence was renewed. Unfortunately the old oaks on the entrance seen from the village have been cut down some years ago. Most of the fields are fallow fields.
After a few years „Charlottenburg“ the village name changed to „Charlotenburg“.

The illustrator and artist Dan Ungureanu has created the following logos after an idea of Ștefan Lazăr for Charlottenburg and the neighboring village Altringen: 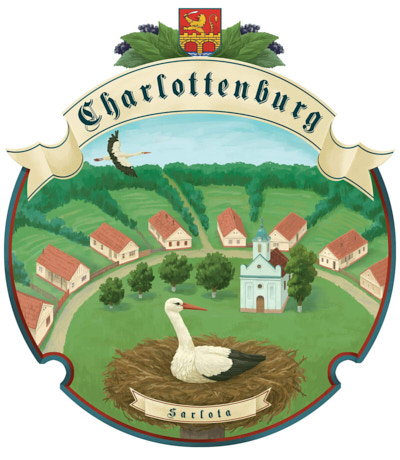 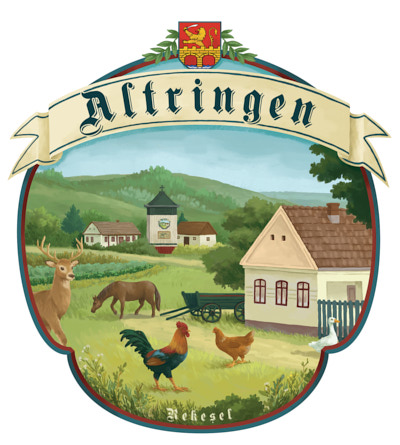 The society „Johann Scharnel“ founded by Ștefan Lazăr is essentially concerned to support the local community, create opportunities to strengthen the community spirit, as well as preserve and restore the architectural heritage of the villages Altringen and Charlottenburg. Some of the current projects include:
▷ Restoring the former school building in Altringen and adapting the resulting space for various cultural events.
▷ Construction of specific signage elements in the villages of Altringen and Charlottenburg, see above.
▷ Classroom improvements at Charlottenburg School and rehabilitation of the roof.
▷ Belvedere Tower project in downtown Charlottenburg to see and experience the beauty and uniqueness of the village.
Detailed and current info: Asociatia Johann Scharnel

The charitable organization Help for Romania Marpingen from Marpingen in the nord of the Saarland has done its first trip to Romania in may of 1990, to Lipova. There followed 15 big transports and some smaller ones for Christmas to schools and kindergartens in the districts Fibis (germ. Fibisch), Masloc (germ. Blumenthal), Remetea-Mica (germ. Königshof) and Bogda (germ. Neuhof). The last big project was the redevelopping of the Charlottenburg school, with the help of the local administration. Further goals: improve the live conditions for old people in this region and help children with their further education. Contact person was Mrs. Ruth Staub.

In 2012 the following indicator was mounted in the village of Masloc (germ. Blumenthal): 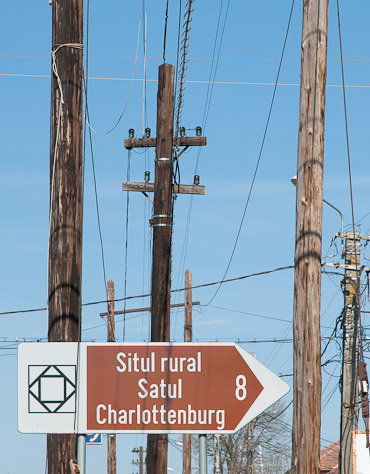